COVID-19: Fitdog Updates
Four indoor exercises your dog needs right now
Meet the Women of Fitdog!
Fitdog 2020 Valentines to Benefit Guidry’s Guardian Foundation
Why You Should Never Fake Having a Service Dog
Overheard Dogs
Thanks for joining our Ugly Sweater Pawty!
Help us collect 2020 lbs. during our pet food drive!
Scent Work provides mind games for the nosey hound
Fitdog’s 9th Annual Howl-O-Ween Photo Contest!
Surprising ways pumpkin benefits dogs
Natural ways to de-flea your home
‘My Friend: Standing Strong’ will give you hope and insight int …
Why daycare is not a cure for separation anxiety in dogs
The secret to pet-proof landscaping
Why you want professional dog hikers in your neighborhood
Why your dog’s 30-minute walk isn’t cutting it
Is Game of Thrones to blame for uptick in homeless Huskies?
8 things you didn’t know about corgis
Is a raw food diet right for your dog?
Dog admitted to USC on full-ride sports scholarship
Dog-friendly events in Los Angeles
Fitdogs named after celebrities
5 places dogs dislike
You ain’t nothin’ but a hound dog
The Fitdog Guide to Bone Treat Safety
Watch the best of Buzzfeed’s animal videos right here
Husky pulls puppy off couch, shows dogs get jealous too
Fitdog of the Month Hall of Fame
Tips for Training Non-Treat Motivated Dogs
Meet Sadie! Our Fitdog the Month for March 2020

This week we celebrated Brecken’s 10th birthday, the dog that inspired Fitdog and ultimately changed my life.

Brecken was born in 2008 on Long Island, NY and spent the first 7 months of his life in Breckenridge, CO with his owner, Brandy Han (Fitdog’s co-owner, and now, my wife). During this time, I was still working in capital markets in New York City and the financial crisis was in full swing. The market downturn became a turning point for us, and we decided to pursue a new life in California. 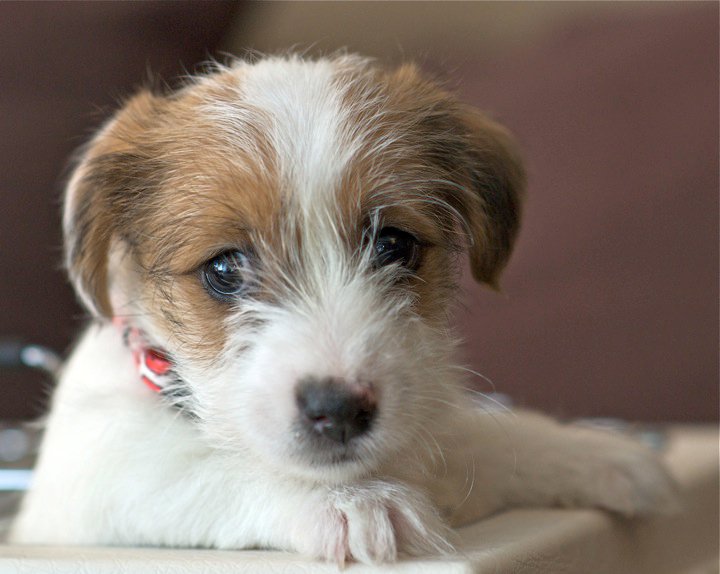 We landed in Santa Monica, CA in May 2009 and immediately began searching for dog daycares for Brecken. At that time, the pet service market in Los Angeles was lagging behind the east coast, and we were disappointed and frustrated by our lack of options. It didn’t take us very long to decide to open our own daycare and choose a name that embodied our energetic and active dog.

As children of the 80s, we thought, what says fitness better than a sweatband? We cut up a facecloth and tied it behind Brecken’s head like a sweatband, sent the photo to my cousin, a graphic designer, and asked her, can you make a logo like this?

We incorporated in June 2009 with a name, a logo and an idea.

The Fitdog Club (FKA Fitdog Sports Club) opened in November 2010, and after 8 years of working with dogs, we continue to redefine dog care and innovate services for dogs.

Ever wonder what a dog does all day when a business has literally been built specifically for him? I’m here to tell you about the charmed life of my dog.

After we opened, Brecken played in daycare every day with his best friends, Ace and Brooklyn. He also helped us lead the Fitdog Runners Group, a meetup group for dogs and their owners that Fitdog hosted on Sundays, and promoted Fitdog in local races. Can you believe this little guy could run an 8-minute mile? 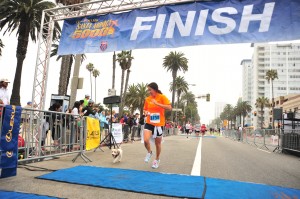 Brandy and Brecken finishing a race in 2012

However, when Brecken was around five years old, he started to dislike daycare, which we now know is super common. Daycare is kind of like a nightclub you use to go to in your twenties that you would never think of going to in your 40s. So at five years old, Brecken was hitting his mid-life stride, and he made it clear to the staff that he didn’t want to hang out with the young pups anymore.

Around the time Brecken’s interest in daycare was waning, we started offering Canyon Hikes and Beach Excursions with our Trainer Jeff. Brecken ultimately switched from daycare to adventure outings and never went back.

Now we have over 17 classes a week for dogs, including Fun & Fit Agility, Cardio Tricks and Pool Safety. Brecken attends five to six classes a week, and sometimes he goes to two classes a day. (Yes, even at 10 years old.) 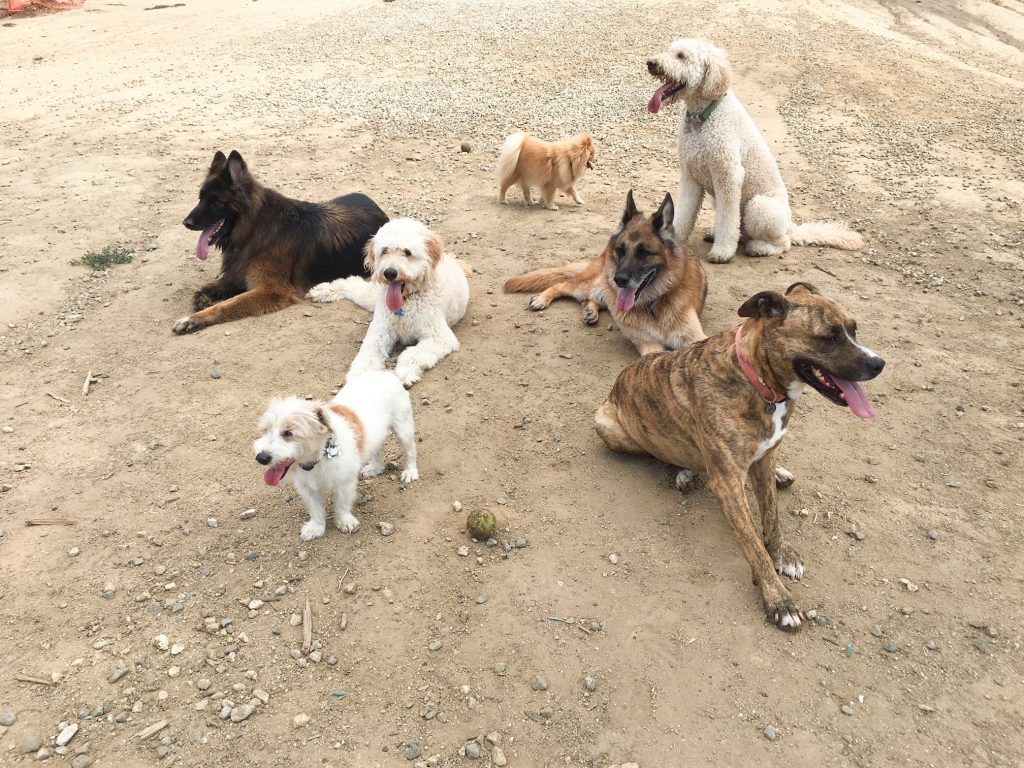 Brecken with his hiking pals

When Brecken isn’t on an adventure, he’s basically an attention getter and will seek out love from anyone, including customers who are usually wondering why a small dog is wandering around the lobby. He also makes sure to set aside time to beg for food in the break room and show off his tricks to the Trainers for treats. 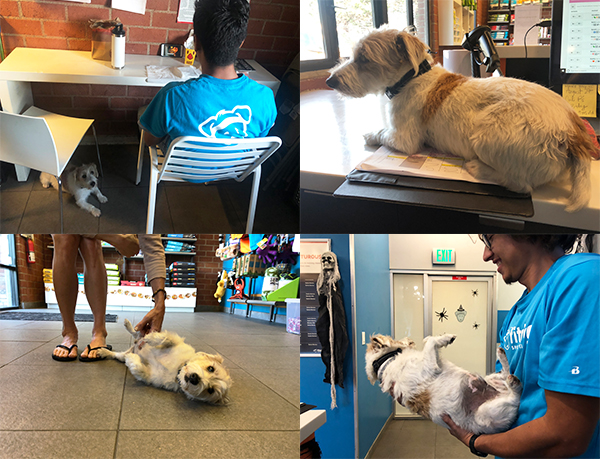 Then it’s all work for him. He barks at every incoming and outgoing dog like a doggy doorbell, follows me around the facility like my own personal assistant, and helps check in guests at the front desk. When he’s being a little too “helpful,” we give him a puzzle or two to keep him busy. He’s gotten pretty good at figuring them out so we keep having to buy more.

Brecken has truly been a part of the family since the beginning. An avid traveler, he’s come with us to San Francisco for wine tastings, walked down the aisle at our wedding in Boston, and has even visited both sets of “grandparents” in Florida and Virginia. 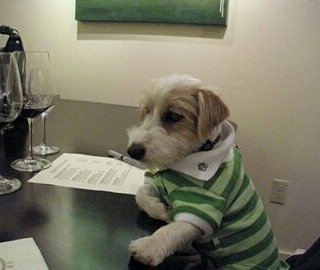 In 2013, his life got turned upside down when our first son, Harrison, was born. And I’m pretty sure he was still recovering from our first son’s arrival when our second son, James, was born in 2016. As of now, he’s accepted his new life. Brecken is Harrison’s “guard dog” at night, and James dutifully feeds him every morning.

I should also mention we have a cat, Meows. He’s known her since he was 2 months old, so basically his whole life. They are not friends, but I like to think they secretly care for each other. 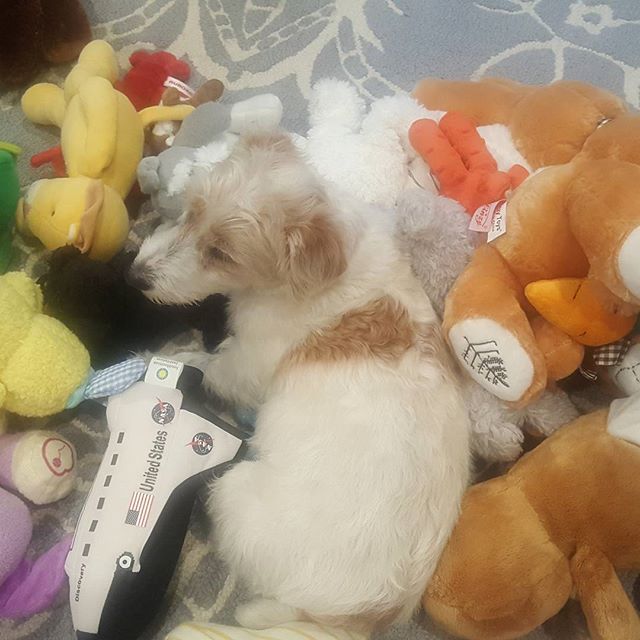 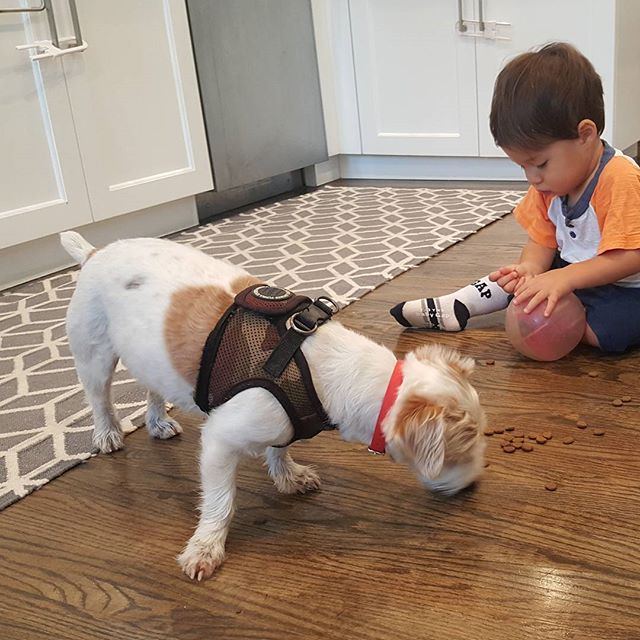 Getting treats from James

I try not to see the end for Brecken despite knowing that it is coming. After owning a dog care facility for almost 8 years, we’ve seen many dogs age and move on. This year was particularly difficult for me as many of our original client’s dogs passed away. It felt like we lost a generation of old friends. I’m grateful that Brecken hasn’t quite reached that point yet.

With his advancing age, the vet visits have definitely increased. We recently brought him to an animal ophthalmologist to check on his cataracts and found out that he has light sensitivity and needed sunglasses. Skin tags pop up here and there. He gets a little stiff from time to time and takes a daily joint supplement. Despite some of the annoyances of old age, he’s in pretty good health and even higher spirits. 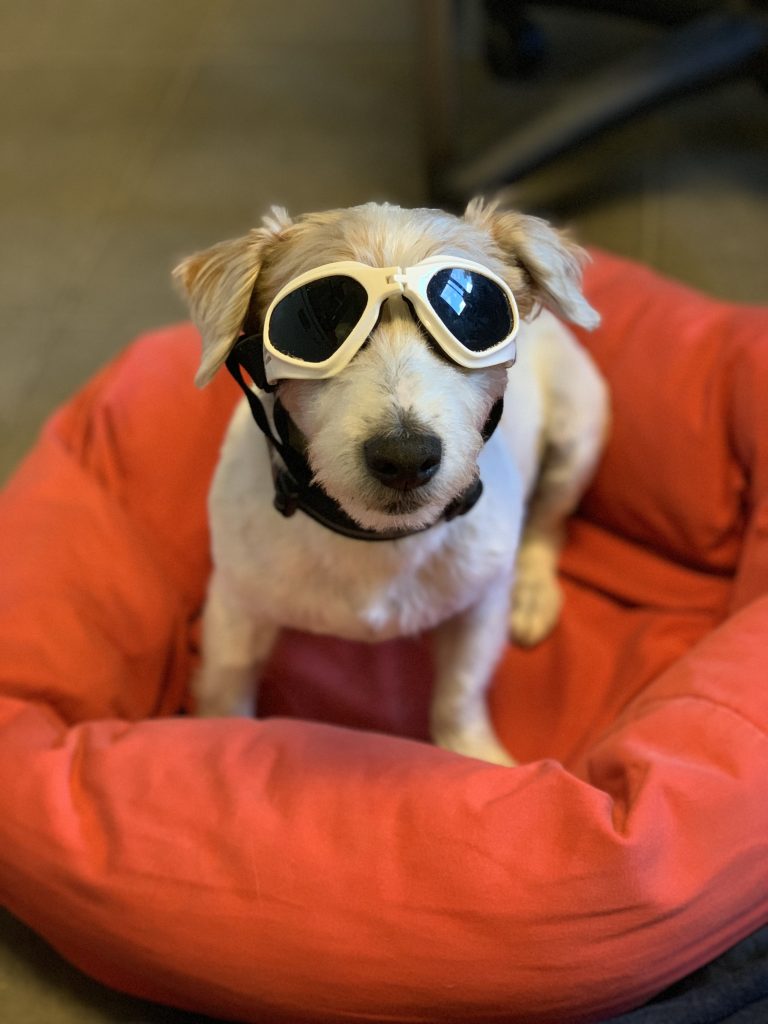 Age is just a number for this guy.

Happy Birthday, Brecken!! You are one adorable, amazing, smart dog.

Categories:
What’s next?
Five things NOT to do with your dog this Halloween

Halloween is right around the corner! While it is easily one of the most exciting and fun holidays of the year, it can be pretty stressful for dogs. In fact, it is often seen as the most dangerous...