Our Halloween Fun with a Pet Psychic!

Happy Halloween! Have you ever wanted to know what your dog is thinking, or how he really felt about certain things? We wanted to get in the “spirit” of Halloween, and thought, what would be more appropriate than to hire a pet psychic to chat with Brecken? We sat down with Karen Muranko of Animals Speak To Me to give us the insight on what’s going on inside of his little mind, and to tell us more about being a pet psychic and communicator.

What is a Pet Psychic?

A pet psychic, or communicator, is someone who can communicate with animals whether they are living or deceased. Many offer their services over the phone as well as in person.

Karen has been communicating with animals professionally for over 9 years and as a medium for 2 years. Karen is a psychic medium for humans as well, but decided to focus on animals after her first encounter channeling a dog during a visit to the vet. She heard a dog in the lobby speaking to her, telling her that he ate something he shouldn’t have and was in a lot of pain. Karen followed up, and as it turns out, she was right! From then on, she knew she had to focus on helping humans better understand their animals.

She specializes in animals (both dogs and cats) with behavioral issues such as house accidents, aggression, and excessive barking since unresolved behavioral concerns are the primary reason humans give up their pets. Her process is to communicate with the animal to find the root cause of their behavior and then work through their behavioral issues, as well as pair them with herbal remedies that could help them. She even guarantees her work. If you follow through with her suggestions and do not see changes within a week, she will give your money back. 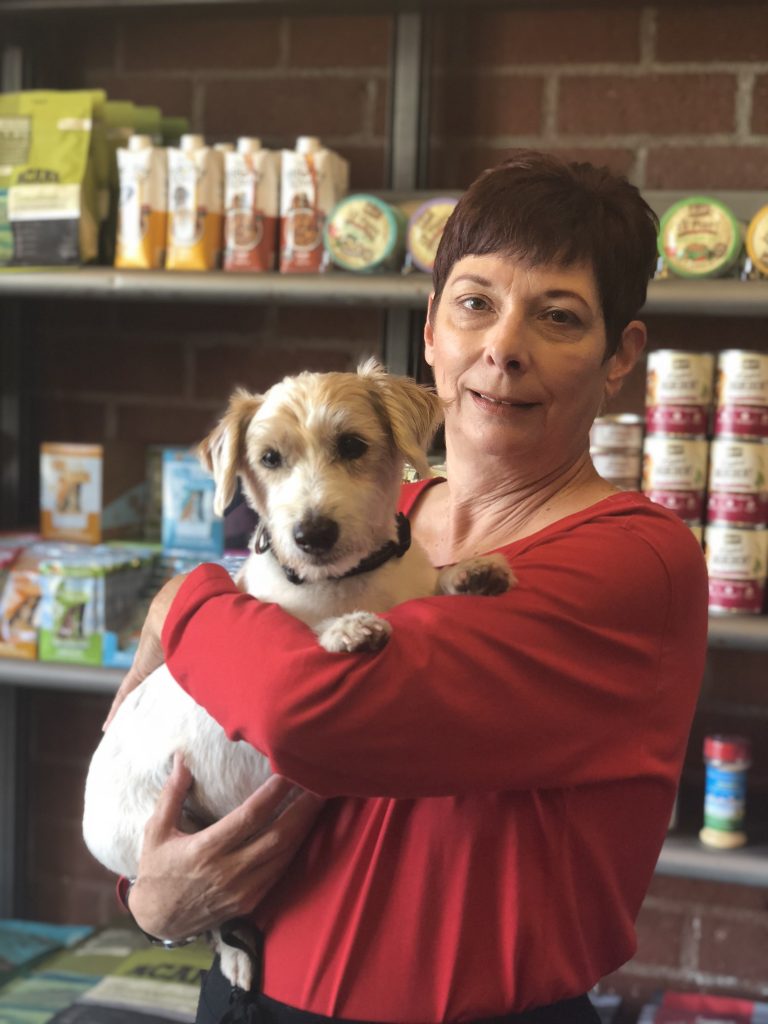 Our Reading With Karen

Right away, Karen picked up on the fact that Brecken was in pain and discomfort, and we let her know that he was suffering from a pancreatitis flare-up. She assured us that with a little pain medication, Brecken will be better in no time.  Also that there was no reason for us to decrease his activities.

Karen mentioned that some animals will communicate freely with her while others are more guarded, or find the process of communicating with her “weird”. Brecken was not open to talking to her initially but once we got started and discussed some of his concerns, he opened up a bit more.

Karen asked us if we had any issues or concerns that we wanted to address with Brecken and that began a discussion about his home life. Brecken lives with his two owners, a 15 year old cat, and two small children. We learned through Karen that Brecken is being very patient and puts up with a lot of unpleasant interactions from the kids (particularly the 2 year old).  She recommended to use a doggy gate to separate the kids and the dog during playtimes, so he’s not in harms way, but can still see what’s going on.

He became much more involved in the “discussion” when we finally addressed his main issue involving the cat ambushing and chasing him. We also discovered that the cat (although not present) is a bully and was likely abused with a stick or object. She torments Brecken for amusement, and he hates it. Karen told Brecken to stand up for himself in order to stop the cat from bullying him.

She also mentioned that he loves being at Fitdog! Which, of course, we can totally verify is true. He enjoys being active and going on Canyon Hikes and Beach Excursions everyday with our Sports team to get all of his energy out.

While Brecken didn’t talk as much as we would have liked, we did gain valuable information from Karen. It was good reminder that while Brecken is being ultra patient and restrained with the children, his patience is not infinite and to be cautious of interactions with kids. Over 4.7 million people are bitten by dogs each year and of those, 42% are children under the age of 11 years old. We love Brecken, but we’re sure he has his limits too. That’s why his owner quickly agreed to reinstall the kid gates as soon as she got home. It also made us want to hear more about the cat since she was a rescue, and her background is unknown.

Would you ever bring your dog to see a pet psychic or communicator? Have you ever tried anything non-conventional to relieve your pet of their stress? Tell us in the comments below!

With winter comes shorter days and longer nights. This likely means your after-work stroll around the block will probably take place after dark. Luckily, you don't have to be in the dark about keeping dogs safe at night....