Five tips to follow when bringing a new pet home
Beginner’s Guide to Lure Coursing
Deadly Disease: Why Lepto Should be a Core Vaccine
Guide to Common Dog Diseases & Parasites
The 7 Best Podcasts for Dog Lovers
Avoid These Grooming Mistakes With Your Doodle
5 Benefits of Teaching Your Dog How to Swim
5 tips to re-socializing your dog after the pandemic
5 Animal Non-Profits to Donate to This Holiday Season
7 Dog-Friendly Thanksgiving Foods
10 Best Dog Photography Tips
Importance of Developmental Based Dog Training
Overweight Dogs: COVID-19 Made My Dog Fat!
Best Pet Tech Products 2020
Best Backyard Activities for your Dog
Foxtails in dogs: A hidden danger on your hiking trail
7 Tips to Teach Your Dog How to Swim
How to modify your home for an elderly pet
Frozen Dog Treats for Summer: 4 Pupsicle Recipes to Treat your Dog
Dog scared of fireworks? Prepare your dog for 4th of July fireworks before …
Puppy Proofing: Using stuffables as an easy solution to naughty behaviors
Socializing Your Dog After COVID-19
Dog-Friendly Camping: 8 Pet Friendly Campgrounds in California
7 Best Easy DIY Dog Treat Recipes
Train and Play Philosophy
Puppy Socialization: Why your dog needs it
5 Puppy Massage Techniques to Relax Your Dog
At-Home Dog Grooming Guide
Four Ways You Can Help Shelters & Rescues During COVID-19
COVID-19: Fitdog Updates

Allergy treatments for dogs is a confusing array of ointments, sprays, pills, vitamins and shampoos.  Thomas McMillen, DVM from Mercy Animal Hospital in Rhode Island has broken down all of the treatment options, so you can make better decisions about your dog’s health.

This article was originally published on Mercy Animal Hospital’s website. Written by: Thomas B. McMillen, DVM

It has been said that allergic skin disease is the most common reason dog owners will come to the veterinarian. It is also, sadly, the most common reason they leave. Fortunately, we now have better and safer treatment options much more likely to provide a satisfactory outcome in what has in the past become a very frustrating condition.

Like all general practice veterinary hospitals, the most common problem we have to deal with is allergic skin disease. The problem is generally seasonal depending on what the patient is allergic to – roughly tree pollen in the Spring, weed pollen in the Fall, and mold mildew and particularly dust mites in the winter, (the ‘closed up house, stale air’ problem). From August to October, this condition, generally referred to as ‘environmental allergies’ often accounts for two thirds of all the cases we see in a given day. Atopic dogs, however, often have multiple allergies and can have flareups several times a year. 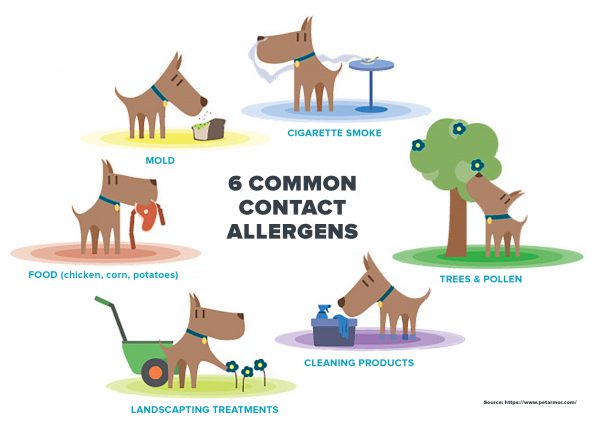 Put simply, when dogs get ‘hay fever’ they don’t sneeze, they itch. This generally begins with the ears, the feet, and the groin or anal region, and can progress over the entire trunk. If that seems odd, consider the person who is allergic to strawberries and eats a strawberry – they get the same type of reaction- red, itchy ears and an allergic rash on the skin. They are called ‘environmental allergies’ rather than ‘inhalant allergies’ because the allergens not only enter the body through the respiratory system, but also through the skin, which can be an important consideration when discussing treatment options.

Types of Allergy Treatments for Dogs

There are basically four choices for direct anti- inflammatory treatment. I have been in practice for over 45 years, and for the first 40 or so, we did not have a satisfactory treatment for the most common condition we faced. Now we have two very good options, Apoquel and Cytopoint, to go along with the old reliables (or perhaps ‘unreliables’), of cortisone and antihistamines.

If your dog flares up for 3 weeks in September each year, fine use cortisone. It is not dangerous for this type of use. For example, if a child gets poison ivy, they go on prednisone. However, if your dog itches from August until November, being on cortisone for a third of the year is a bad plan.

Generally speaking spring allergies are short term. Trees pollinate like crazy but only for a short period, so cortisone treatment is feasible. However, fall allergies are long term, as the weeds pollinate from August until November. Now that we have other effective choices with less side effects, cortisone has become a more of a ‘niche’ option that is useful in certain acute, or refractory cases but rarely a first ‘go-to’.

These are pretty much the opposite of cortisone: nice and safe but don’t work as well as we would like. In my opinion (and the opinion of most including the most popular veterinary drug handbook), Benadryl is simply useless for atopy. (The handbook, under dosing, says ‘effectiveness is questionable but may be tried’. Translation: It doesn’t work, but since we know you are going to use it anyway, here is the dose.). Benadryl is a fine drug for bee stings, hives, vaccine reactions, etc. but not for atopy. Other antihistamines, like loratadine, clementine, and hydroxyzine (Claritin, Taoist D, and Atarax respectively), are more effective and can be an easy, safe alternative for mild cases, but still fare less effective than cortisone.

This is a relatively new drug that appears to be quite safe with limited side effects and good effectiveness and has an interesting history. It came out about six years ago, worked like a miracle drug, and was so popular that it quickly became back ordered so that only the dermatologists could get it. It reappeared two years later. Most of our clients are very pleased with it. It is probably our first line initial drug at this time. However, it can get expensive for long term maintenance. 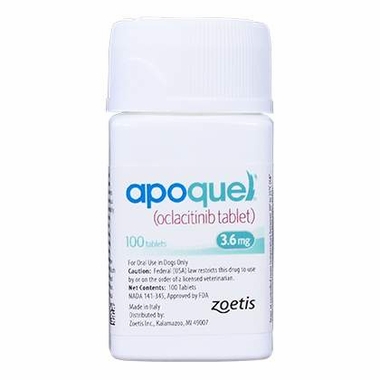 This is an interesting approach. It really is not actually an anti-inflammatory drug at all. Rather it is a monoclonal antibody (monoclonal- all genetically identical, antibody- chemical produced by the body to attack ‘invaders’) that binds with inflammatory substances to render them inert. It appears to be virtually free of side effects. Frankly, we were very skeptical of this new approach at first, but it has worked very well. Again, as with most new drugs, it can be pricey, especially for larger patients. The injections are given monthly.

The goal of adjunctive allergy treatments for dogs is to minimize the use of medications listed above by improving relief in various ways. Using less medication is always good, whether to avoid the side effects of cortisone, the costs of Apoquel and Cytopoint, or just be ‘off drugs’.

These are not as effective as the direct anti-inflammatory. Let’s go back to our friend, the dog who unfortunately ate the strawberry. She can put Benadryl cream, cortisone cream, calamine lotion, etc. on the rash and it will feel a little better. Or, she can take an antihistamine, make the reaction stop, and feel a lot better. Thus, systemic (absorbed into the body) drugs to spotty allergic reaction are better than the topicals to mask and receive the symptoms. 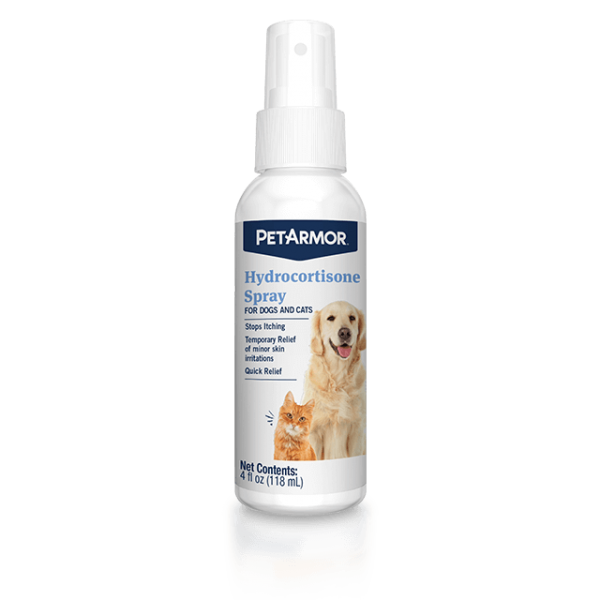 To cut down on the need for systemic drugs, there are three types of topical drugs that can help:

Fish oil capsules are a useful coat conditioner and have a midland-inflammatory effect. However, they do not seem to do much for the atopy by themselves, but can useful in reducing the need for the ‘direct acting’ medications listed above. They also build up the ‘lipid barrier’, a subcutaneous layer that serves to copout all the allergens attempting to penetrate the skin. Generally a useful adjunct of a ‘do no harm, probably do some good’ sort of thing. 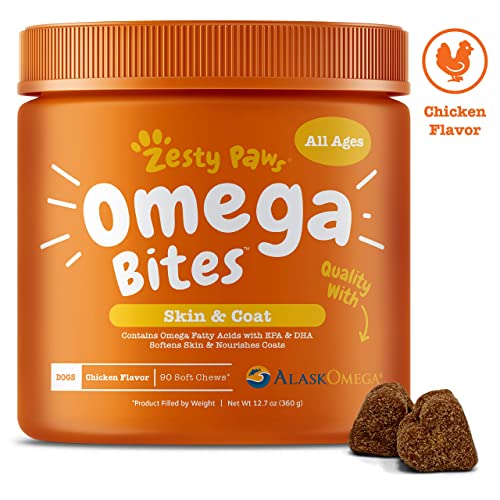 Allergy testing followed by using ‘allergy shots’ to make the allergic reaction less sever is another course action. The old injections have been replaced by oral medications simply put under the tongue with a syringe. Desensitization works best at targeting a limited number of allergens. So it might be a good choice when testing shows a severe reaction to dust mites for example. Dermatologists routinely use this method even though the results are not particularly impressive. However, it does have its place in the arsenal for certain cases and is worth discussing.

The key thing to remember is that even if our veterinary clinic sees a dozen cases of atopy in a day, allergy treatments for dogs are not one size fits all. The otherwise healthy dog who erupts into a firestorm of itching for three weeks each September is very different from a dog with health problems who gets ‘a little itchy’ on and off for about half the year. Your dog’s individual needs and choices should be discussed with your veterinarian.

Categories:
What’s next?
Sick dogs should stay at home

From interacting with new dogs to spending time in different locations, there are a number of ways dogs can get sick. We know to stay home when we’re sick, but we need to understand that the same rule...

read more
More from Off The Leash:
Five tips to follow when bringing a new pet home
Beginner’s Guide to Lure Coursing
Deadly Disease: Why Lepto Should be a Core Vaccine