Why your dog loves the fall season

Fitdog 2020 Valentines to Benefit Guidry’s Guardian Foundation
Why You Should Never Fake Having a Service Dog
Overheard Dogs
Thanks for joining our Ugly Sweater Pawty!
Help us collect 2020 lbs. during our pet food drive!
Scent Work provides mind games for the nosey hound
Fitdog’s 9th Annual Howl-O-Ween Photo Contest!
Surprising ways pumpkin benefits dogs
Natural ways to de-flea your home
‘My Friend: Standing Strong’ will give you hope and insight int …
Why daycare is not a cure for separation anxiety in dogs
The secret to pet-proof landscaping
Why you want professional dog hikers in your neighborhood
Why your dog’s 30-minute walk isn’t cutting it
Is Game of Thrones to blame for uptick in homeless Huskies?
8 things you didn’t know about corgis
Is a raw food diet right for your dog?
Dog admitted to USC on full-ride sports scholarship
Dog-friendly events in Los Angeles
Fitdogs named after celebrities
5 places dogs dislike
You ain’t nothin’ but a hound dog
The Fitdog Guide to Bone Treat Safety
Watch the best of Buzzfeed’s animal videos right here
Husky pulls puppy off couch, shows dogs get jealous too
Fitdog of the Month Hall of Fame
Tips for Training Non-Treat Motivated Dogs
Meet Harrison Ford! Our Fitdog of the Month for February 2020
Stop what you’re doing and watch Kitbull, Pixar’s new short
KonMari your life and help shelter animals
This Buzzfeed article shows ‘How Dogs Are Perfect Weirdos,’ an …

There’s no better feeling than that first autumnal breeze signaling a change of seasons. Humans aren’t the only ones who notice a change in the air. Dogs also sense the change and thrive in the fall season. With plenty of fun events around LA, a change in the weather, and everyone’s favorite Halloween Costume Contest just around the corner, it’s no wonder fall is your dog’s favorite season.

Why your dog loves the fall

Allergies Be Gone
Spring and summer months bring on allergies. Whether from grass, flowers and their pollen, allergies get the best of us – including your pup! When allergies act up, dogs have watery eyes and excessively scratch or lick themselves. Thankfully, those reactions tend to disappear as the weather changes and the leaves start to fall.

Better Walking Conditions
Over the summer, many outlets shared the five-second rule to tell if it’s too hot for your dog to walk on asphalt. This summer, and even now, has been especially hot in SoCal causing sidewalks to be too hot for your pup.  With the cooler weather, your dog can get those much needed longer walks even in the city. 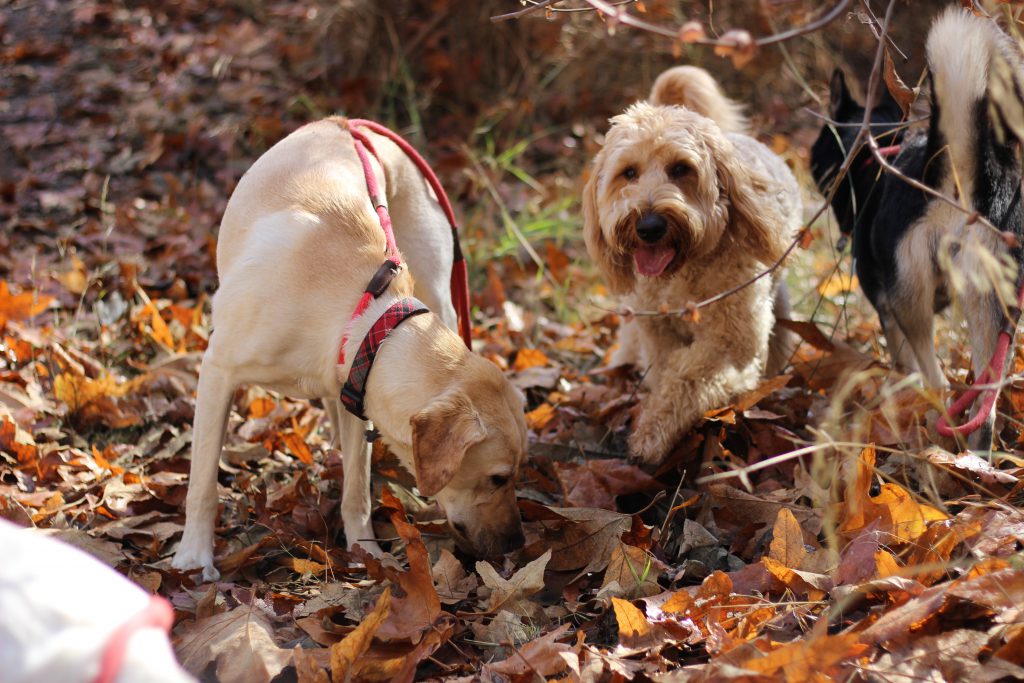 Cooler Temperatures
Humans prefer many outdoor activities in the summer, but dogs love doing them in the cooler fall temperatures! Dogs prefer to be outside when the temperature drops because it’s easier for them to regulate their body temperature so they can run around and play for longer periods of time.  You might need a sweater heading into the cooler fall months (if that ever happens here in LA), but your dog is ready to go.

Fewer Flea Bites
Fleas thrive in temperatures from 70 to 85 degrees.  As temperatures drop into the 60s and 50s, fleas are less of a nuisance. Yay, no more flea bathes! Unfortunately, this doesn’t mean they die. Instead fleas dormant until spring. But at least your dog can enjoy a few months with less flea activity.

Of course, with fall also comes a series of holidays. Unlike humans, dogs are not huge fans of the holidays. So we’ve created a holiday guide to get them prepped for the upcoming festivities. Read our Holiday Guide!

This article was originally published on October 28, 2015 and was edited from its original version.

Boarding your dog for the very first time can be stressful. Plus worrying about whether or not your dog will be happy and properly cared for can put a damper on your travels, but knowing what to expect...

read more
More from Off The Leash:
Fitdog 2020 Valentines to Benefit Guidry’s Guardian Foundation
Why You Should Never Fake Having a Service Dog
Overheard Dogs