TV for dogs: does the science live up to the hype?

7 Best Easy DIY Dog Treat Recipes
Train and Play Philosophy
Puppy Socialization: What is it and why you should care
5 Puppy Massage Techniques to Relax Your Dog
At-Home Dog Grooming Guide
Four Ways You Can Help Shelters & Rescues During COVID-19
COVID-19: Fitdog Updates
Four indoor exercises your dog needs right now
Meet the Women of Fitdog!
Fitdog 2020 Valentines to Benefit Guidry’s Guardian Foundation
Why You Should Never Fake Having a Service Dog
Overheard Dogs
Thanks for joining our Ugly Sweater Pawty!
Help us collect 2020 lbs. during our pet food drive!
Scent Work provides mind games for the nosey hound
Fitdog’s 9th Annual Howl-O-Ween Photo Contest!
Surprising ways pumpkin benefits dogs
Natural ways to de-flea your home
‘My Friend: Standing Strong’ will give you hope and insight int …
Why daycare is not a cure for separation anxiety in dogs
The secret to pet-proof landscaping
Why you want professional dog hikers in your neighborhood
Why your dog’s 30-minute walk isn’t cutting it
Is Game of Thrones to blame for uptick in homeless Huskies?
8 things you didn’t know about corgis
Is a raw food diet right for your dog?
Dog admitted to USC on full-ride sports scholarship
Dog-friendly events in Los Angeles
Fitdogs named after celebrities
5 places dogs dislike
You ain’t nothin’ but a hound dog

Is television good for dogs? Content creators from the web and beyond have developed what they call “dog-friendly content.” As televisions get more high-definition, dogs are able to see them more easily, making dog tv a natural niche for someone to fill. But though technology and entertainment dominate our human experience, do we really need to bring the dogs into it?

The concept behind dog-friendly tv is that while owners are away, their dog has something to keep them stimulated and occupied to reduce feelings of loneliness, anxiety, and boredom. We might use television as a vessel to combat such symptoms, but does it actually resolve them? Likely, no. The same goes for your dog: watching tv can be a time-filler, but it does not replace necessary exercise, engagement, and stimulation.

Before the next time you switch the tv for your dog on while heading out for work, consider some of the following.

Dogs see television much differently than we do. Dogs have “terrific motion sensitivity,” according to Dr. Stanley Coren, a professor of psychology at the University of British Columbia. Dog’s heightened sensitivity makes it hard to watch shows at 30 frames per second, the long-time standard for tv programming. Older tv’s with slower frame rates may appear to dogs as a succession of flickering images rather than a smooth, cohesive film, according to scientists. Dogs have an easier time seeing newer televisions that have faster frame rates, which makes them more likely to engage with television since it appears realistic.

Additionally, dogs see color less sharply than we do. So, unless your content is over-saturated, it’s likely pup won’t think it’s realistic. If your tv is too high above your dog’s eye level, they may not see it at all.

The published research on this topic is almost nonexistent. I reached out to one dog tv company to see if they were able to share the scientific research they claim to base their product on, but they declined my request. So, until the science is made more available, we cannot tell for sure whether television is good for dogs. 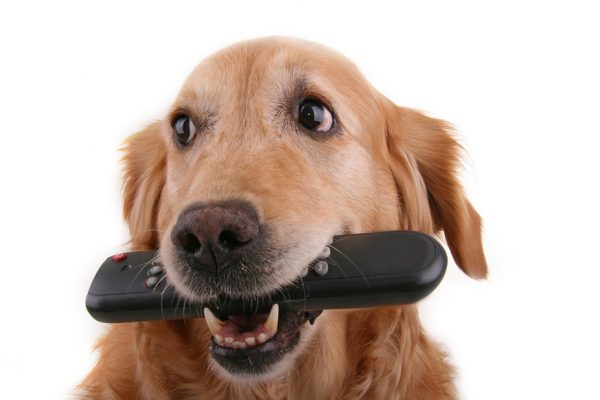 Does it really help with anxiety?

Purveyors of the dog tv culture have claimed television can help alleviate separation anxiety. Again, since there is so little published research on this topic, it’s hard to say if it really does.

However, there has been much research done on the healing properties of sound therapy for dogs. Research suggests dogs respond well to simple, classical music. There has also been researching done on the ways different music affects shelter dogs. Evidence suggests a positive correlation between calming, classical music and relaxation levels in dogs.

If your dog is displaying anxious behavior, sitting them in front of the television will not solve their problems. Exercise and mental stimulation are key proponents of overcoming anxiety. While the tv might occupy your dog, it does not guarantee stimulation or engagement. If your dog is bored during the day, try leaving a puzzle toy with treats out for them to solve. Giving your dog the puzzle as you head out for work can occupy your dog while you leave, and also reduce anxiety. If you can swing it, have a walker come by mid-day, or sign them up for beach excursions, cardio tricks class, or a hike!

Dare we say, you might just be feeling guilty about leaving your dog at home all day? As dog people, we know the feeling of dread that comes with leaving your buddy behind while you’re out and about without them. We tend to think we know what’s best for our pets, but sometimes what’s best for us is not necessarily what they need.

If you really want to help your pet, giving them toys that require mental stimulation and thought. Remember all those tales of shoes eaten and couches chewed? Those are results of boredom. What your dog is lacking is mental stimulation. Playing calming music, preparing puzzle toys, or leaving your dog with a peanut-butter-filled Kong are all ways to leave your dog happily occupied, at least for a while.

Certainly, some dogs do like television. Just take Luca here:

… But that doesn’t mean that it’s necessarily benefitting your dog. In fact, your dog might just become obsessed with it.

We can’t say what the effects are when it comes to dogs watching tv. Some dogs respond well to it while most others don’t. This much we believe to be true: every dog is different. If your dog perks up whenever they see you flicking on the tv, chances are they some of the few that enjoy it. If your dog is not into it, don’t take it personally. They might not even see what’s happening, or care to know.

We do not recommend using television as a placeholder for other, more important activities like exercise, playtime, and mental stimulation. While there’s no harm in vegging out with your dog in front of the tv for an hour or two, it’s not the healthiest habit to encourage all day. If you are concerned about your dog feeling anxious or bored during the day, there are many options, but tv-for-dogs is not your best catch-all solution. Everything in moderation, friends!

How does your dog respond to the television? Tell us in the comments!

Categories:
What’s next?
Dog’s Day Out takes rescue dogs on their best day ever

Rocky Kanaka takes two dogs on their best day ever in his series Dog's Day Out. In this video, two dogs from California rescue group Marley's Mutts were taken on a shopping spree and treated to 'puppaccinos,' and...

read more
More from Off The Leash:
7 Best Easy DIY Dog Treat Recipes
Train and Play Philosophy
Puppy Socialization: What is it and why you should care